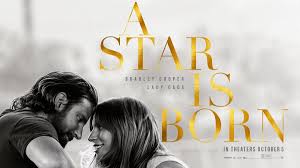 Towards the end of “A Star is Born” Sam Elliott describes Jackson’s (the character played by Bradley Cooper) philosophy about music; “12 notes and the octave repeats.” He was saying how music is the same 12 notes repeated over and over, and the artist only gives their interpretation of those 12 notes. This description perfect sums up “A Star is Born,” and by extension remakes, reboots, and oft-told stories in a broad sense. This movie is the third remake of William Wellman’s 1937 classic starring Janet Gaynor and Fredrich March. The first being in George Cukor’s 1954 version with Judy Garland and James Mason – REQUIRED VIEWING – and the second being Frank Pierson’s 1976 with Barbara Streisand and Kris Kristofferson. All four versions follow the same basic narrative with the ’37 and ’54 versions mirroring each other and this version mirroring the ’76 version. Despite utilizing the same story, each of the four versions is different and unique in their own right.

“A Star is Born” serves as Bradley Cooper’s directorial debut. Since the story has already been told three times “A Star is Born” is certainly a safe bet. But it was also an excellent way for him to prove himself because he needed to bring something new and different to the story to make it an interesting and worthwhile endeavor. Cooper directs the movie well; it is one heck of a directorial debut. It is difficult to explain how exactly Cooper differentiated his version from the others without going into great detail about each version, and I do not have time for that right now. The long story short version is that it is all about subtle nuances that Cooper uses as a director.

Cooper and Lady Gaga are phenomenal. Cooper wears many hats in this picture: director, writer, actor, producer, and he even co-wrote some of the music in the movie. Gaga is stellar in her feature film debut; she had appeared on “American Horror Story” for which she won a Golden Globe. The history of Hollywood is full of popular music stars who at some point in their career spend time in the movies. For example, Sinatra, for whom winning the Oscar revived his career allowing him to become the iconic entertainer of the 20th century. Yes, Gaga will certainly get the Oscar nomination. Cooper will also likely be nominated as well and not just for his acting.

Speaking of Oscar, “A Star is Born” sets the bar for the Oscars this year. It can be easy to deride the film for being not only a remake but the third remake of a well-trodden story. It is much more than that and like Sam Elliott says “12 notes and the octave repeats.”